Personally, I think Christmas isn’t Christmas without at least one version of A Christmas Carol being on TV over the festive season (my favourite is actually the Muppets’ take on the story: it’s great fun, and remarkably faithful to the original source material, believe it or not) – and, most importantly, I re-read the book every year. However, I’ve also recently become intrigued by the many early film versions of this classic tale, particularly those made during the silent era of British cinema. And it is there that we are heading today, via the BFI National Archive.

Last year, I posted a fascinating film clip of the 1901 version, which is possibly the earliest cinema adaptation of Charles Dickens’s festive fable of redemption known to exist. This Christmas Eve, however, we’re moving forward in time by thirteen years, with a short extract from the 1914 version. Released during the first Christmas season of World War One, which, with hindsight, adds a stark layer of poignancy to the Victorian sentimentality of the story, this film is regarded as being among the best Dickens adaptations of the period.

END_OF_DOCUMENT_TOKEN_TO_BE_REPLACED

One of the earliest surviving adaptations of Charles Dickens’ work on film (and certainly the earliest surviving film version of A Christmas Carol), this is a remarkably ambitious piece of film-making for the time – for a start, it attempts to cram an eighty page story into a mere five minutes, which, for anyone who knows the source text well, seems quite an achievement!

Sadly, the only known remaining print is incomplete, but enough of it is left to demonstrate magician and director W.R Booth’s (1869-1938) creative approach to special effects (watch out for the scene where Scrooge’s doorknocker turns into Jacob Marley’s head, and the initial appearance of Marley’s ghost himself), some of which even now are pretty impressive.

END_OF_DOCUMENT_TOKEN_TO_BE_REPLACED

For many people, Christmas just isn’t Christmas without a bit of Charles Dickens. Indeed, there is a strong argument to be made that it was the popularity of his works (and the often sentimental descriptions of the festive season therein) that actually went a long way towards reinventing the festival and creating what we now see as a ‘traditional’ Christmas. But even if you’ve never read any of his novels, there is one of his stories that everyone knows because its characters and events have become an integral part of our culture of Christmas – and it is the story behind that particular story I’ll be looking at today, on this Christmas Eve…

Born in February 1812, Charles Dickens had a peripatetic childhood, his family frequently moving to where his father’s job as a pay clerk in the Royal Dockyards took them. In the 1820s, his spendthrift father was jailed for debt, and the young Charles went to work in a blacking factory making shoe polish to help the family’s often parlous finances. This experience of family disruption and what we would now call child labour must have left deep psychological scars on the young man at a formative time in his life – it was certainly something he drew on in his later writings, as the reader can see in his ‘Christmas Books’ amongst others.

All this upheaval during his youth meant that Dickens had little formal education (he was mostly self-taught having effectively left school by the time he was 15), but his childhood experiences had made him ambitious and determined to make a success of himself from an early age. Starting out in a solicitor’s office, he worked his way into journalism and was a parliamentary reporter by the early 1830s. But he was also writing fiction, and his first short story was published in 1833. Three years later, the initial installment of his still-popular novel The Pickwick Papers was published and he rapidly became a household name as a result of its immediate success.

END_OF_DOCUMENT_TOKEN_TO_BE_REPLACED 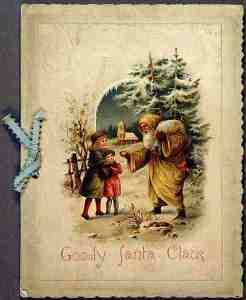 Today, when we think of a ‘traditional’ Christmas, it is a Victorian-style celebration we are envisioning. Christmas trees, crackers, pantomimes, cards – all these now-familiar seasonal things were either invented or popularised by the Victorians. There are, however, three people in particular who are now considered mostly responsible for the creation of what is today seen as a very British, very Victorian take on Christmas – although, strangely enough, only one of them was actually a Brit!

The first of this trio was a member of the royal family. The introduction of the Christmas tree to Britain is traditionally thought to be down to Victoria’s German husband, Prince Albert. However, it is more likely that it was George III’s German wife, Queen Charlotte, who brought the first tree to Britain – Albert merely popularised them.

In the early years of their marriage, Victoria encouraged German Christmas customs to make her husband feel more at home in Britain, and approving press coverage meant that it wasn’t long before the Christmas tree became wildly popular with the British people. The middle classes, in particular, were soon copying this royal idea in their own homes, decorating their trees with candles, small toys and gifts, cards, sweets and other goodies (like sugar plums – see below).

END_OF_DOCUMENT_TOKEN_TO_BE_REPLACED

It’s been snowing in London today and there has been much talk of a white Christmas as a result, all of which prompted me to dig out some stuff I wrote about snow at Christmas and extreme winter weather round about this time last year (you can see the original posts here and here) and repost them on Another Kind Of Mind. The cold snap is going to continue, so make sure you wrap up warm now, and stay away from the yellow snow…

In the UK, a white Christmas is not as common an occurrance as you might think, mainly because December is early in the season for snow in most parts of Britain (snow is more common in January). And determining what exactly constitutes a white Christmas is a matter of debate.

For most people, when they think of a white Christmas they imagine precisely that – snow falling (and settling) on Christmas Day in large amounts. However, particularly for the purpose of placing bets on the matter, a white Christmas can be as insignificant-sounding as a single snowflake being observed falling during the twenty-four hours of 25th December. According to the Met Office website, the last Christmas to see conditions much like the former was 2004, when snow covered much of Northern Ireland, Scotland, Wales, the Midlands, north-east and the far south-west of England.

That may have been cold, but count yourself lucky that you weren’t alive during the three hundred years between 1550 and 1850 when an unlucky Britain was in the grip of what became known as the ‘Little Ice Age’. Snow at Christmas was much more common during that period and its association with the season was cemented by the descriptions of festive snow in Charles Dickens’ Pickwick Papers and A Christmas Carol (Dickens, like any good Englishman should, had a strong, scientific interest in the weather).